ANNE HECHE DIES WITH CONFLICT AROUND HER WILL, LEAVING HER SONS & ESTATE IN LEGAL LIMBO—PART 1

Actress Anne Heche died this August following a tragic car accident in which she plowed her vehicle into a West Los Angeles home, where it burst into flames. After being pulled from the wreckage, the Emmy Award-winning actress was hospitalized in critical condition, suffering from severe burns and smoke inhalation. 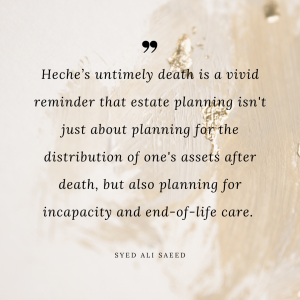 Heche is survived by two young sons. Her eldest, Homer Heche Laffoon, is 20 years old. He is from her marriage with ex-husband Coleman Laffoon. Her youngest son, Atlas Heche Tupper, is 13. His father is Canadian actor James Tupper, with whom Heche had a 10-year relationship following her divorce from Laffoon. Heche is also survived by her mother, Nancy Heche.

According to a court petition filed by her eldest son Homer on August 31st, Heche died without a will, and Homer requested that he be named executor of his late mother’s estate. However, on September 15th, Heche’s ex-boyfriend James Tupper filed a probate petition objecting to Homer’s bid. He claimed that Heche e-mailed him a copy of her will in 2011, leaving him (Tupper) in charge of her estate.  https://pagesix.com/2022/09/01/anne-heche-died-without-will-son-homer-seeks-control-of-estate/

In a report by Rolling Stone, Tupper says Heche nominated him to handle her affairs, allegedly stating in her e-mail, “My wishes are that all of my assets go to the control of Mr. James Tupper to be used to raise my children and then given to the children.” https://www.rollingstone.com/tv-movies/tv-movie-news/anne-heche-estate-war-1234594195/

Tupper requested that the court honor Heche’s final wishes and deny Homer’s petition, which he alleges incorrectly claimed she died intestate. Intestate is the legal term for when someone dies without a will. In Tupper’s petition, he questioned both Homer’s ability to carry out the executor role and his motives, noting that “Homer is only 20 years of age and is unemployed, and was estranged from [Heche] at the time of her death.”

While we can’t know for certain whether or not Anne Heche had a will or if the will Tupper describes is valid, given that there is so much confusion surrounding her will, the late actress most likely didn’t have any trusts set up either. Her failure to plan is likely to create a number of major problems for her two sons and other surviving loved ones.

With this in mind, in this series of articles we’ll discuss Heche’s estate planning mistakes and how those errors will likely impact her family and assets. From there, we’ll outline what you can learn from this tragic situation and the steps you can take to make certain that your loved ones never need to endure a similar situation. 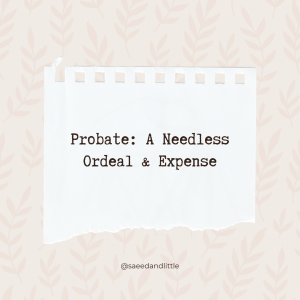 If you die without a will, or with uncertainty around your will, as Heche did—and even if your estate plan includes a will alone—you are guaranteeing your family will have to deal with the court process of probate upon your death or incapacity. Like all court proceedings, probate can be long, costly, and traumatic for your surviving loved ones.

Until Heche’s estate completes the probate process, her assets will be mostly inaccessible to her heirs. As a result, her sons, Homer and Atlas, could be left without any financial support from their late mother for quite a significant amount of time.

It will likely take many months just to locate all of Heche’s assets, and it’s likely some of those assets will get overlooked—and some may never be found. All told, there is approximately $58 billion in unclaimed property across the United States, and this is exactly how a great deal of it ends up lost.

To ensure all of her assets are located and accounted for, Heche could have had a relationship with a lawyer who, ideally, would have created (and maintained) an inventory of her assets. Such an inventory not only makes creating your estate plan much easier, but most importantly, it allows your loved ones to know what you have, where it is, and how to access it if something happens to you.

As your estate planning lawyer, we will not only help you create a comprehensive asset inventory, we’ll make sure it stays regularly updated throughout your lifetime.

What we know so far is that Heche didn’t seem to have a lawyer who created an inventory of her assets, or to make sure her surviving family would stay out of court, or even out of conflict. As a result, her estate is likely to be stuck in probate for at least a year or more. Even then, that assumes everything goes smoothly and there are no serious conflicts or disputes among Heche’s potential heirs or creditors, which is common following a celebrity’s death—and as we are already seeing between Homer and Tupper.

In fact, with his surviving heirs and creditors fighting over the rights to his vast fortune, it took more than six years for Prince’s estate to be settled. https://www.rollingstone.com/music/music-news/prince-estate-value-1285413/

The unnecessarily lengthy time frame is just one of the drawbacks to probate—the unnecessary expense of a probate case is a whole other issue. Before Homer and Atlas can inherit a dime, a veritable army of other people and entities—attorneys, a personal representative, accountants, various advisors, creditors, and possibly, the IRS—must all be paid, and this is likely to seriously deplete Heche’s estate.

Probate costs in California average 5% of the total value of the estate, leaving an estimated cost to her family of approximately $200,000 or more. Most of these fees could have been avoided with a properly established estate plan—and with a lawyer to guide her and her family throughout her life and beyond.

Last, and perhaps worst, probate is open to the public, so all of Heche’s dirty laundry will be fodder for the tabloids, as it already has been for so much of her life. Given the actress’ past history with mental illness and her contentious relationships with her mother, ex-husband, and Ellen DeGeneres, the tabloids are likely to dig up plenty of dirt.

Fortunately, there’s a simple solution to ensuring your surviving loved ones will avoid the cost, time delay, and public nature of probate upon your eventual death or potential incapacity, and this solution is available not only to rich celebrities, but to regular folks, as well.

With a well-counseled and drafted estate plan, likely including a living trust in addition to a will (and a trusted advisor to support it all), Homer and Atlas would have been able to access their late mother’s assets without the need for any court intervention whatsoever, if that’s what Heche would have wanted.

Alternatively, Heche could have made it clear that she wanted Tupper controlling her affairs, and her lawyer could have confirmed that without dispute. Finally, as long as a trust is properly created and maintained, it will remain private, and the transfer of assets to your heirs can happen within the privacy of our office, not a courtroom, and on your family’s time.

This would have prevented the tabloids and other potential bad actors from getting access to the details of Heche’s assets, her beneficiaries, and family conflicts, all of which will now be readily available for public consumption.

Don’t let your loved ones be left with a mess like Anne Heche’s family is dealing with now. Using our Life & Legacy Planning process, we’ll work with you to put in place the right combination of estate planning solutions to fit with your asset profile, family dynamics, budget, as well as your overall goals and desires.

Next week, in part two of this series, we’ll discuss the type of trust Heche could have used to pass on her assets to her two young sons.

Heche’s untimely death is a vivid reminder that estate planning isn’t just about planning for the distribution of one’s assets after death, but also planning for incapacity and end-of-life care. With this in mind, in part two, we’ll also address the estate planning tools the late actress should have had in place to deal with the time period following her terrible accident when she was in a coma.

Until then, if you need to create your estate plan, or you need to review an existing plan, reach out to us to schedule your visit. With our guidance and support, we can help keep your family out of court and conflict, and ensure your loved ones won’t have to endure the same tragic consequences as Heche’s.

This article is a service of Saeed & Little, LLP. We do not just draft documents; we ensure you make informed and empowered decisions about life and death, for yourself and the people you love. Thats why we offer a Family Wealth Planning Session™, during which you will get more financially organized than you’ve ever been before and make all the best choices for the people you love.

You can begin by calling our office today to schedule a Family Wealth Planning Session and mention this article to find out how to get this $750 session at no charge.

Ali Saeed will reach out to you shortly.

Complete this form to send us a message. Everything submitted through this form is fully confidential and we will reach back out to you promptly.

Book A Call With Eric

Pick your time on the next page.